From Star Trek, the Original Series, we learn that Vulcans believe in a concept called Infinite Diversity in Infinite Combinations, or IDIC. The Vulcan symbol is actually the symbol for IDIC – a triangle intersecting a circle and creating a gem. Completely different, yet when combined together they make something beautiful. 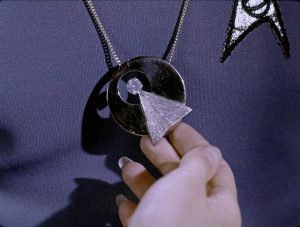 This concept is something I think gets lost, especially in today’s politically charged climate.

Now, we all have different opinions, and sometimes those opinions are at odds, but we also have a love of Star Trek – otherwise we wouldn’t be in this fanclub, would we? The thing we need to remember is that 1. our clubs are a place to come together, not to tear each other apart, and 2. politics has no place in our clubs because of how divisive it can be.

That said, we need to remember Gene Roddenberry’s himself wrote about diversity in TOS:

“We’ve each learned to be delighted with what we are. The Vulcans learned that centuries before we did.”
“It is basic to the Vulcan philosophy, sir. The combination of a number of things to make existence worthwhile.”
– Kirk and Spock, “The Savage Curtain”

IDIC represents the belief that beauty, growth, progress, etc. result from the union of the unlike – even opposites. In other words, that we are better together than we are apart.
(See this article about IDIC from Women at Warp, a Roddenberry Podcast.)

So, whether we meet in person or on social media, please remember that we are all fans of Star Trek. The Great Bird of the Galaxy himself would agree that it’s better to build one another up than to tear each other down.

Who says Star Trek fans can’t like Star Wars (or other stuff)?

I have never understood the thought that if you like Star Trek you can’t like Star Wars (and vice versa). After all, one of Star Trek’s guiding principles is IDIC – Infinite Diversity in Infinite Combinations.

For example, when I was little my dad & I watched Star Trek (TOS) reruns every week when they came on TV. It was something we enjoyed together, and one of the best memories I have of him. Then, when I was in grade school this strange space movie came out in movie theaters. I don’t remember a whole lot from the first time I saw that movie, but I just HAD to be Princess Leia for Halloween.

Now, several years later, I enjoy both franchises and many others: Doctor Who, Battlestar Galactica (both versions), Harry Potter, the DC television series (Arrow, Supergirl, etc.), the Marvel Cinematic Universe (Iron Man, Avengers, Doctor Strange, etc.). And I’m not the only one.

What other shows/movies do you enjoy apart from Star Trek? Somewhere among our crew you can find those who enjoy sci-fi, fantasy, anime, mystery, and many other genres. In fact, a few months ago we held an activity where we shared some other, non-Star Trek series that we enjoy. Together we enjoyed episodes of: Stargate, The IT Crowd, The Dragon Prince, Robocop (series), Babylon 5, and The Devil is a Part-Timer.

So with that in mind, we’d like to share a link with you. This is something our own Admiral Hollinger found on You Tube.

Remember in the original Star Wars movie where Darth Vader faces off against Obi-Wan Kenobi? It’s sort of just… there. Well, a group called FXitinPost redid it with current visual effects technology and a couple of actors filling in the more… energetic scenes. Check it out!