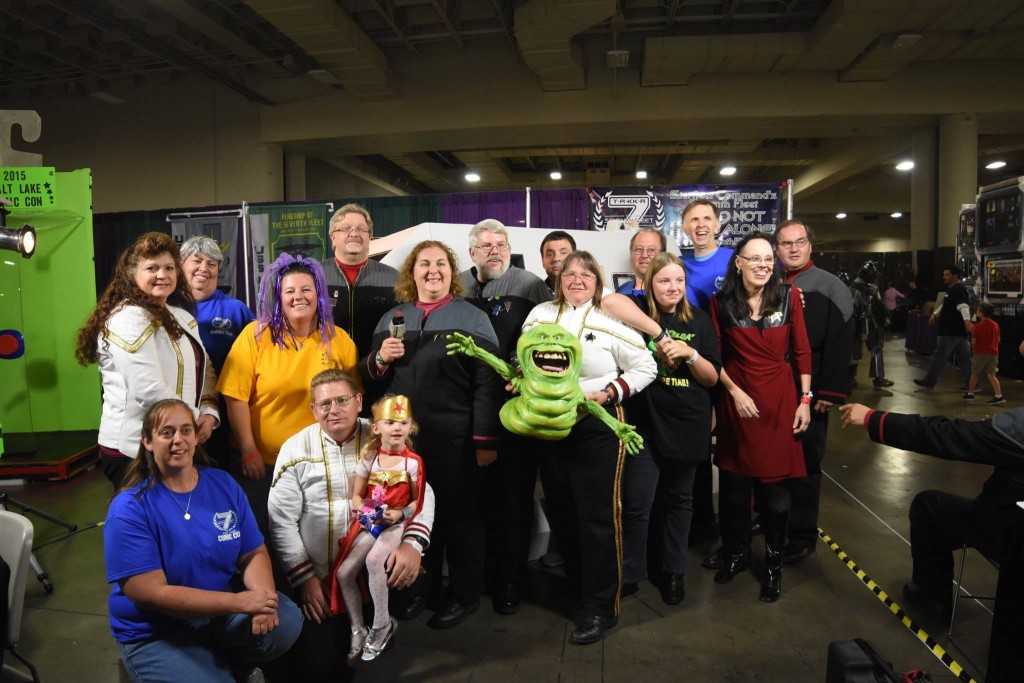 As the current Commanding Officer of the USS Kelly, it is my privilege to report on the progress of the ship and the crew on a monthly basis.  It has been a year since I have taken this position.  I have been with the USS Kelly for 26 years since I married my husband Dennis Hollinger (now Vice Admiral).  The amount of time and dedication involved has been sometimes overwhelming but very rewarding.

With that being said as an introduction, the ship is continuing its ongoing mission “To Boldly Go!”  Our latest and greatest success is in combining our talents and strengths with our fellow Seventh Fleet family during Salt Lake City’s Comic Con with Dan Farr.  It is great to see all of our members out volunteering and doing the things they love to do most.  Whether escorting our celebrity guests, or helping out at the Seventh Fleet booth.  We also have the opportunity to meet more Star Trek fans who want to come and join us having fun.

Our greatest moment and highlight of the convention, has to be when the two main stars of the Star Trek Continues series, joins us at our booth for a live Periscope broadcast.  I mean when Chris Doohan, who plays his father’s role as Scotty, comes up to me earlier to make arrangements to stop by for an interview, was like fantastic.  What a great compliment to the Seventh Fleet.  We had Vic Mignogna, who plays Kirk, who started the interview with me as an introduction to the group.  He of course invited everyone to the Premiere of their latest episode that evening at 6:00pm.  Then he wanted to know who built this magnificent Shuttlecraft, which allowed me to introduce him to Stewart Hunsaker.  Stewart is a member of our Cache Valley chapter the USS Rendezvous, under the direction of his captain Marla Trowbridge.  Thanks to all of the many members of the Seventh Fleet who volunteered countless hours of labor in getting this ship ready for launch.  It is amazing to me how much this Star Trek family can accomplish.  Last but not least, we were able to raise $1600 for our charity this year…Cache County Children’s Justice Center for abused children.  The Seventh Fleet is Totally Awesome!

Also to let you know, the USS Kelly will be in charge of the next Comic Con FanX charity fundraiser come March 2016 on behalf of the Seventh Fleet.

Without bragging too much, I believe the Star Trek vs. Star Wars group challenge was a definite win for Star Trek.  The cosplay is always so unbelievable.  I am a people watcher anyway.  While sitting at the Seventh Fleet Booth we encountered many species.  Overall it was a fantastic Stay-cation for me, my family members and friends.

As stated before, our mission is “To Boldly Go”!  Come join us at least once or twice a month for an activity and a game night.  Be sure and check out our facebook page as well, for the most current events that are happening on the ship.